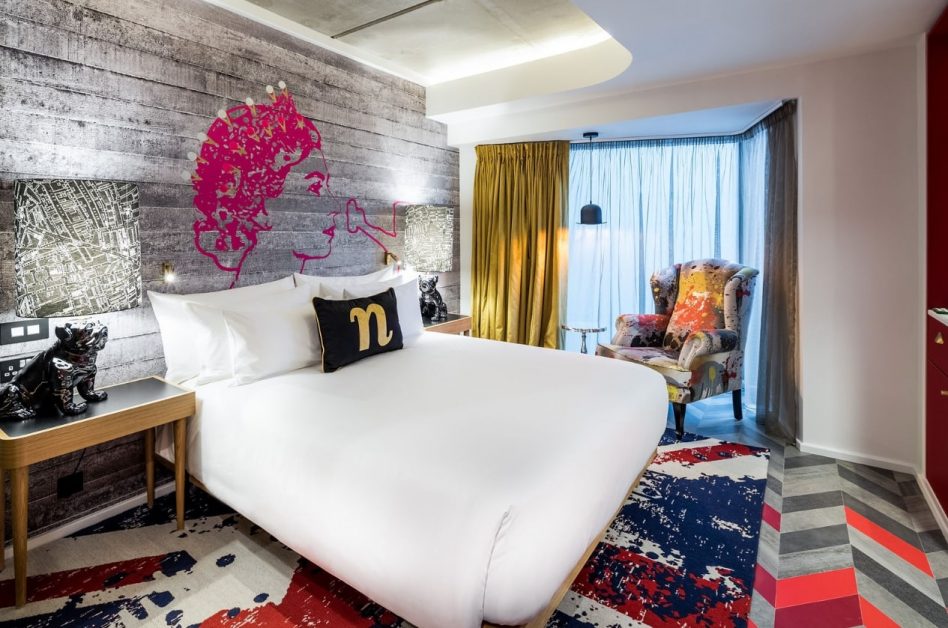 This Shoreditch hotel is punk rock meets Alice in Wonderland

With hotels in Amsterdam, Berlin, Milan and Rotterdam, it was only a matter of time before boutique hospitality group nhow – pronounced ‘now’ – opened one in London.

Their newest establishment debuted on the fringes of Shoreditch in 2020, but couldn’t welcome guests long due to Covid.

Following a relaunch when restrictions were lifted, nhow London still feels shiny and new – and best of all, it’s brilliantly bonkers. Think punk rock mixed with Alice In Wonderland and you’re getting close.

Here’s what happened when we checked into their Penthouse Suite for the night.

Hidden in a Shoreditch side street a short walk from Old Street or Angel stations, nhow appears residential from the outside. Look for the green neon ‘n’ and you’ll find the entrance.

Step through the sliding doors and it’s as if you’re in another world – and a topsy-turvy one at that. It describes itself as ‘punk meets the Queen’ and there are nods to London everywhere you look, none more so than the 30ft Big Ben rocket in the lobby.

The downstairs is huge, and as well as a restaurant, there is a bar and two further spacious seating areas. We arrived in the evening and the vibe was buzzy, so we ordered a glass of fizz before checking in.

If neutrals are your thing, nhow may not be the place for you as it couldn’t get more in your face if it tried. That said, the decor is tasteful and has real thought behind it.

Designed by Project Orang, the theme in the lobby is ‘London Reloaded’. It’s a celebration of British icons, London landmarks, the Royal Family and the London Underground.

Highlights include the custom-made Queen’s Guard armchairs which are a hit with Instagrammers, the two throne seats as you walk in and the Rolling Stone-style lips on the lobby wall.

As a bit of fun, there is even a Dolly the sheep under the reception desk. The hotel design is meant to give guests an escape from the drudgery of lockdown, and it certainly put a smile on our faces.

The eight-floor hotel has 190 rooms, including seven suites and a penthouse, where we stayed for the night.

As we stepped out the lift, it was clear nhow was unlike any hotel we had been in before. Colourful Notting Hill inspired doors lead to each room, which made you feel like you were walking down a real-life street. The doors even have knockers on.

Our room – 814 – was right at the end of the corridor and we half expected to turn into Alice and fall down the rabbit hole as we entered.

There was a corridor featuring a gold loo and Sex Pistols-style artwork of the Queen with a moustache. This led through to a huge lounge room which felt futuristic but also put us in mind of Austin Powers.

There was a bar area complete with cocktail shaker, egg rattan chair by the window, huge built in TV, as well as a novel life-size dog statue.

The bedroom featured a Christian Lacroix headboard. While the marble bathroom had a gold sink, massive rainfall shower and freestanding bath. We particularly loved the royal embossed towels.

The food at nhow is meant for casual dining, so we were surprised at how good it actually was when we went down for dinner – and the portions here are big too.

We tried the Rosemary Doughnut with Parma Ham and Parmesan Custard, the King Prawn Bao Bun (both £8.50) and the Salt Cod Croquettes (£4.50) to start.

This was followed by the Roast Porchetta with Triple Cooked Roast Potatoes, Crackling Puffs and Salsa Verde (£18.50). All were tasty, but if you order one thing here make it the Bao Bun.

Too stuffed to try any desserts, we retired to the ‘fire corner’ – another Instagrammable part of the lobby with a faux crackling fire and neon signs saying words like ‘warm’, ‘spark’ and ‘heat’.

Although it sounds random, it was the perfect place for a nightcap and the sofas are huge so there is plenty of room for larger groups.

For those that can never quite manage a full bottle of wine, it’s worth noting they do wine by the half bottle at nhow, which you rarely see anymore.

For health conscious guests, there is a state-of-the-art gym. While those wanting to get around by bike can hire stylish Bromptons from reception.

The hotel is also dog friendly for anyone travelling with their four-legged friend in tow (£35 per dog) and they have a Lazy Sunday 3pm check out available, instead of the usual 12pm.

Helpful staff are on hand to assist with anything from dinner reservations to fun-filled days out. All you need to do is ask.

Make sure you check out the London Underground ‘mind the gap’ toilets downstairs. They are some of the most novel we’ve ever been in.

For all its bonkersness, nhow is a genuinely great hotel designed with guests’ needs in mind. From the friendly staff to its eclectic style and impressive food and drink, plus thoughtful touches like room separators and Brompton bikes, it has as much substance as it does style.

Read more: The Manchester hotel you need on your radar 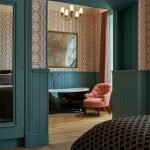 The Mitre: A Riverside Hotel Fit For Royalty 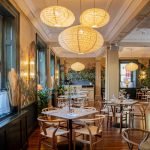