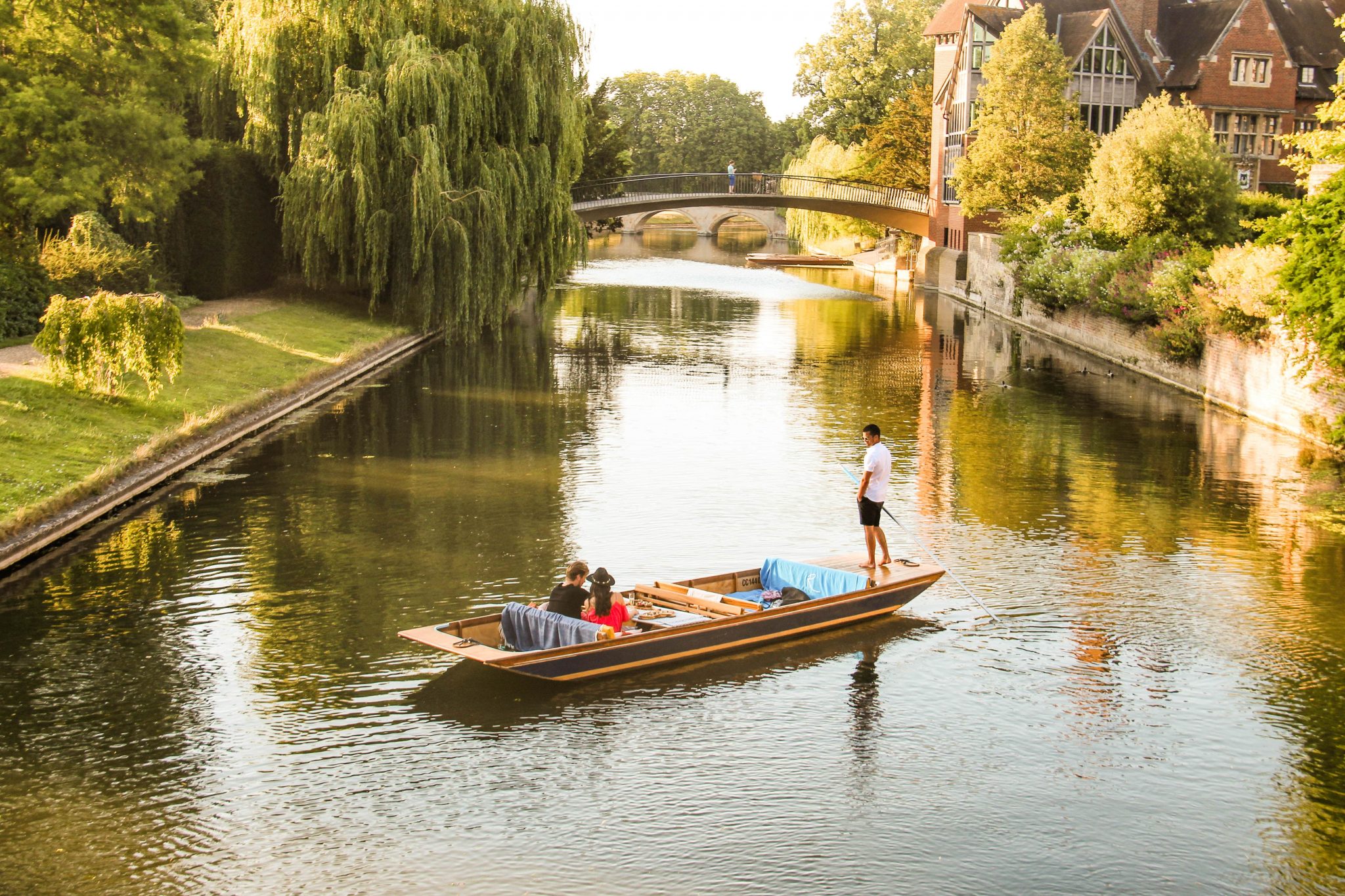 Cambridge is known for its famous university, which is one of the oldest in the world, but there’s more to this beautiful city than brainy students.

Less than an hour on the train from London, it’s the perfect destination for a UK city break.

Culture vultures will be glad to know it has over 30 museums, iconic landmarks such as The Mathematical Bridge and Corpus Clock. You can even spot urban cows.

One of the best things you can do while in Cambridge is take a punt down the River Cam. You can even add a champagne or cream tea while you’re doing it.

Where to stay in Cambridge

The oldest hotel in Cambridge is the University Arms, where we stayed, which recently underwent an £80 million refurbishment. Although it dates back to 1834, there is nothing stuffy or traditional about it.

The 189 rooms and suites are modern with stand out features like freestanding baths, chaise longues and views over Parker’s Piece, a park said to be the birthplace of English football.

Its grand lobby is modelled on the halls of the great Cambridge University colleges nearby. While the hotel library, with its big leather sofas and open fireplace, is a haven for bibliophiles.

One of the city’s best bars and restaurants – Parker’s Tavern – is also within the hotel and was buzzy and full of people celebrating special occasions when we visited. This quintessentially British brasserie serves sharing dishes such as the Roast Rib of Beef cooked over coals for two (£69.50), Honey and Thyme Slow Roast Norfolk Duck (£27.50) and their take on a classic Spaghetti Bolognese (£14.50/19). Visit for lunch and get three courses for £25 or pop in for one of their afternoon teas. A Winnie the Pooh inspired afternoon tea starts from £36pp. They also hold a monthly zero-waste supperclub called Rubbish Cooks.

Guests can book an aromatherapy massage in one of the hotel’s treatment rooms. Packages with afternoon tea are also available. Outside the hotel, get around on the chic University Arms bikes, which are free to use.

Other Cambridge hotels worth staying at include The Varsity Hotel & Spa, conveniently located next to a punting spot further in town.

The newly opened Graduate Cambridge hotel on the banks of the River Cam has stylish but affordable rooms and the Garden House restaurant, with a terrace overlooking the water, is well worth a visit. Be sure to book a table for afternoon tea in the adjoining Garden Room.

The Clayton Hotel, formerly The Tamburlaine, is chic but family friendly and situated right next to the train station, a 10-minute walk to the city centre.

The Gonville Hotel, The Fellows House, part of the Hilton’s Curio Collection, and the Hotel du Vin & Bistro, on the other side of town but still close to the action, are also among the best stays in Cambridge.

Those wanting self-catering or a longer stay should book the chic apartments at Turing Locke in Eddington, part of the Locke hotels. Slightly outside town is Bethnal & Bec Luxury Stays, dog-friendly retreats with hot tubs, fancy baths, cinema projectors and private chef experiences. Book a quirky stay at Mad Hatters Cabins in Ely, which sleep 2-5 people, or cosy up in Waterlily Cabin by its own wild swimming pond.

Where to eat and drink in Cambridge

If it’s a fancy night you’re after, scoff oysters and champagne at Trinity Restaurant, open Thursday to Sunday. Two star Michelin dining can be found at Midsummer House. Visit for lunch and pay £150pp for the tasting menu. The evening menu starts from £250pp. Reservations at Restaurant 22 open two months in advance. If you can bag a table at this riverside dining room set in a beautiful Victorian townhouse, tasting menus start from £90pp. The set lunch on Thursdays is £55pp.

Other noteworthy restaurants include Italian deli and dining room Limoncello on Mill Road, North African eatery Bedouin and The Garden House at the Graduate hotel, the perfect spot for afternoon tea. The Oak Bistro offers elegant dining and is even lovelier in the summer months as it has a walled garden terrace. The Old Bicycle Shop serves up vegan fare in what was once the UK’s oldest bike shop.

For sophisticated cocktails head to 196 Bar or sip sundowners from the pretty rooftop terrace at SIX bar and brasserie at the Varsity Hotel & Spa. Add a twist of science to your drinks at 1920s-style speakeasy The LAB. NOVI is a coffee shop by day, cocktail bar and restaurant by night with a cute terrace. La Raza is where to head for late night drinks, tapas and live music. The Town and Gown is a former cinema which has been converted into an atmospheric pub and theatre venue. While The Blue Moon is cool music venue where you might just hear the next big thing.

When it comes to gastropubs, Cambridge is spoiled for choice. Some of the best in town are The Orator, the industrial chic Pint Shop, and The Punter, a shabby chic pub on the edge of town that is well worth a visit. The Eagle pub in the city centre is where scientists celebrated when they discovered DNA in 1953, while The Maypole is one of the oldest pubs in Cambridge.

Epic Sunday roasts can be found at The Cambridge Chop House. If you can bag a window seat it’s perfect for people watching and is just 50 yards from Kings College Chapel. The Anchor on the River Cam and The Petersfield pub on pretty Sturton Street are also worth a visit.

Things to do in Cambridge

You can’t come to Cambridge and not go punting on the River Cam. It’s one of the best ways to see the city and is not to be missed. A punt on a sunny autumn morning was magical.

One of the most famous landmarks you’ll see is The Mathematical Bridge, as well as the ‘Backs’ of Kings College Chapel, The Wren Library at Trinity College and the Bridge of Sighs. Keep your eyes peeled for the urban cows which graze on the city’s common spaces.

Two of the best companies to book a tour with are Scudamore’s – Cambridge’s original punting company – or Rutherford’s, which offer extras like cream teas and champagne punts. Another great way to get around is by bike and Cambridge is known as the cycling capital of the UK.

Cambridge also has the most museums in the UK within a square mile outside of London, so you won’t be short of a culture fix. Of more than 30 on offer, favourites include the free to get in Fitzwilliam Museum, which houses half a million pieces from around the world from Egyptian coffins to Renaissance sculptures.

Deep-dive into Antarctic adventures at The Polar Museum, see an enormous fin whale skeleton at the Museum of Zoology, step back in time with a visit to the David Parr House, a preserved Victorian home once owned by an interior designer. Kettle’s Yard is where to head for modern art, while the Cambridge University Botanic Garden is a treasure trove of more than 8,000 plant species. Cambridge University Library is one of only six libraries in the UK that receives a copy of every book published in England, Scotland, Wales and Northern Ireland.

While you’re walking around look out for the Corpus Clock, which was unveiled by Stephen Hawking in 2008, and is said to be one of the world’s greatest inventions. The face of the clock is plated in pure 24-carat gold and the radiating ripples allude to the Big Bang, the impact which formed the universe and is considered the beginning of time.

No visit to Cambridge would be complete without popping into one of the city’s impressive colleges. Be sure to check opening times to avoid disappointment and some may require advance booking.

Fancy a dip? The Jesus Green Lido is one of the longest outdoor pools in Europe at 91 metres. Note it’s unheated, so is best visited between the months of May and September.

How to get to Cambridge

Cambridge is in eastern England, about a two hour drive from London. It is served by the M11 and A1 from the South. From the North, the A1 and M1 link to the A14 dual carriageway into the city.

The quickest way to get to Cambridge is by train, which is encouraged as the city strives to be more sustainable, and there are regular connections between London, where journeys take less than an hour.

You can also get connections from Birmingham and the north of the UK.

Buses via National Rail are also available from all major cities. If you are travelling from abroad, the nearest airport is Stansted.

Read next: How to spend a charming weekend in Warwick 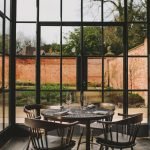 New UK Restaurants To Book A Table At Now 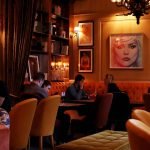